The Hughes Transmission crew has years of experience with the 4L80E transmission and they feel it is the perfect choice for those who want the strongest overdrive automatic available and that was reason enough for our decision.

According to Hughes there is much about the 41480E. They have a gear spread that allows hard, off-the-line acceleration with an overdrive top cog for reduced engine rpm for long distance cruising—ratios are First, 2.48:1; Second, 1.48:1; Third, 1.00:1; and Fourth, 0.75:1. In addition these transmissions can be made to withstand huge amounts of horsepower with modifications Hughes has perfected. Add to that a torque converter that allows higher-than-stock stall speed for maximum torque multiplication along with a lock-up function, which virtually eliminates all heat buildup in the converter at cruising speeds and improves efficiency, and you’ve got the best in terms of performance and practicality.

Like all contemporary automatic overdrive transmissions the 4L80E requires an electronic control unit to operate. Hughes offers controllers that are pre-programmed and  require no software, laptop, or PC for installation, tuning, or proper function and a pre-terminated wiring harness for simple plug-and-play operation is included. When required, a throttle position sensor (TPS) kit and mounting bracket that will work with virtually any carburetor is optional, with EFI systems the Hughes harness is simply spliced into the existing TPS.

This is what connects the engine to the transmission. Not only does it allow the engine to keep running while the ear is stationary, but it can also provide torque multiplication when accelerating from a standstill. For a simplistic explanation of how a torque converter works, picture what would happen if two electric fans were facing each other and one was turned on. As the one under power began to turn and move air, the other one would also begin to turn. If you can visualize that, you’ve got the basic idea of how a torque converter works. In a torque converter, both fans are in a container: one is connected to the engine and the other to the transmission, and oil is used rather than air.

As might be expected, there is some slippage inherent with a torque converter; so many overdrive automatics now have converters with a hydraulically applied internal clutch that hooks the transmission directly to the engine for increased efficiency. While better fuel mileage is often considered to be the advantage of a lockup converter :here is another, often overlooked, purpose. The higher ratio provided by an overdrive Fourth gear can put an additional load on a conventional converter causing excessive slippage even in light throttle cruise conditions. That slippage creates heat and heat’s the enemy of an automatic transmission. When used with an overdrive automatic a lockup style will lower engine speed in cruise conditions and lengthen the transmission’s life. Overdrive automatics and lockup converters are made for one another.

As gears go, planetaries can do it all. Made up of three elements— sun, ring, and planet pinion gears—they can provide forward or reverse rotation, a speed increase, constant speed, or a speed reduction.

Three things are necessary to make planetary gears operate: an input (power from the engine), an output (power going out), and a reactor (one of the elements is held stationary). The gear ratio and the direction of travel depend on which element is performing each function. Most transmissions have more than one planetary gear set to provide a variety of gear ratios.

Bands and clutches hold the reactors stationary. An automatic transmission goes into gear by holding one part of a planetary gear set stationary with a band or a clutch that is applied by hydraulic pressure. One reactor is released and another applied when the transmission shifts gears; the transmission is in Neutral if no reactor is applied. If you’ve ever been in a car and the transmission felt like it was slipping, that’s exactly what was happening—the band or clutch pack wasn’t holding the reactor stationary and it was slipping and not transferring full power. In an extreme case, the clutches, or band, don’t hold at all, and one or more gears (and in some cases, every gear) stops working as a result.

The valvebody is the hydraulic “brain” of the transmission; it controls the shifting of gears by controlling which reactor is applied and when, Some transmissions use hydraulic pressure from a governor, throttle valve, or vacuum modulator to determine shift points, while many contemporary versions use computer-controlled electromechanical servos.

Let’s start with the torque converter. In many cases, the stall speed of the converter is increased. Simply put, stall speed is the rpm that the engine will reach with the transmission in gear, the brakes applied, and the throttle held wide open. The higher rpm simply allows the engine to produce more power, which  will launch the car harder from a standstill. The downside is that higher stall speed converters will slip more in “normal” use. That can create excessive heat, which is what damages transmissions. Of course the perfect solution is a lockup converter with increased stall speed—that’s the best of both worlds.

Most stock automatic are designed to be seamless; that is, the shifts are smooth to the point of being hard to detect; this is done by timing the release and application of the various reactors. One may begin to apply as the other begins to release so there is a split second of overlap. While this results in a smooth shift, there is a certain amount of slippage that takes place in the process, which wears the friction surfaces.

Shift kits generally do two things: They change the timing of the release and application of the reactors, which results in a firmer, more noticeable shift and may also lengthen the life of the transmission. In addition the hydraulic pressure to apply the reactors is often increased too, which means the clutches and bands have more holding power, thus increasing the torque capacity of the transmission.

With many transmissions today using computer controls, a variation on the shift kit theme is the hopped– up computer. It can and will do the same thing as a conventional shift kit, but changes can often be made without dropping the trans pan.

A common method to increase an automatic transmission’s torque-carrying capacity is to improve the friction surfaces that hold the reactors. This may be done by using improved materials, more clutch plates, wider bands, or a combination of them all.

Just as with a manual transmission, an automatic has mechanical components that are susceptible to damage when overstressed. As the horsepower applied to it is increased, it is often necessary to increase the strength of an automatic transmission’s shafts, clutch drums, planetary gear sets, sprags, and other internal parts.

When it comes to selecting a valvebody there are a number of choices. The 4L80E features electronic solenoids built into the valvebody. These solenoids control the shift functions, regulate the  line pressure generated by the front pump, and regulate the torque converter lockup clutch function. Many modern aftermarket EN controllers will control this transmission as well, which means a separate TCU would not be required. Another option is a full manual valvebody. It features a forward shift pattern (P-R-N-4-3-2-1), and requires the driver to manually upshift and downshift the transmission. This valvebody option will not shift automatically, and eliminates the necessity of an electronic transmission control unit. The torque converter lockup function can still be retained and operated via a simple toggle switch or push button that will have to be manually activated by the driver. The full manual valvebody option is a great for the enthusiast who wants save a few dollars on a 4L80E  package and does not mind shifting the transmission manually.

The third valvebody option is a manual transbrake valvebody. It features a forward shift pattern (P-R-N-4-3-2-l) and requires the driver to manually upshift and downshift the transmission. The transbrake feature allows the transmission to essentially be “locked up” in low gear so that wide-open throttle can be applied without experiencing any vehicle movement. When the transbrake is released via an electric button the transmission unlocks and allows the vehicle to launch under maximum power. This option is very popular for street/strip enthusiasts who want the benefits of an overdrive transmission on the street, maximum performance potential at the dragstrip while eliminating the necessity of a TCU.

When designing a torque converter Hughes gathers as much data about the customer’s combination as possible, such as crankshaft stroke length, camshaft duration, camshaft lobe separation angle, torque production, vehicle weight, rear gear ratio, and rear tire height. Use of poweradders will also influence how the converter will be built.

Hughes offers 9-, 10.5-, and 13-inch torque converters for our 4L80E transmission packages, with stall speeds ranging anywhere from 1,800 to 5,500-plus rpm, depending on what the combination requires. The majority of Hughes 4L80E converters feature a billet steel front cover and billet steel lockup piston with extra-wide heavy-duty clutch lining for maximum durability. They also offer triple lockup disc options for those customers wanting the absolute strongest torque converter that money can buy. 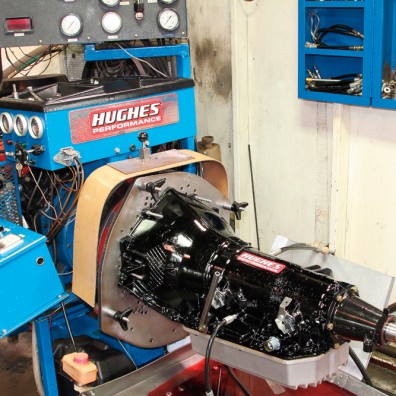 1. Each Hughes transmission is completely dyno tested to verify line pressure, shift function, and cooler flow before it goes out the door. 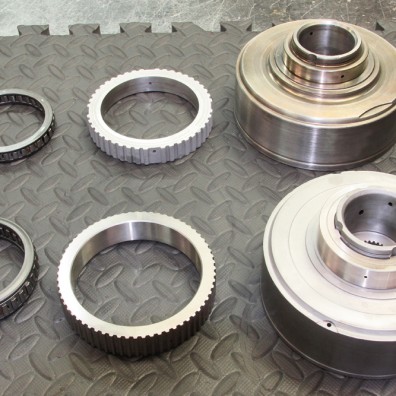 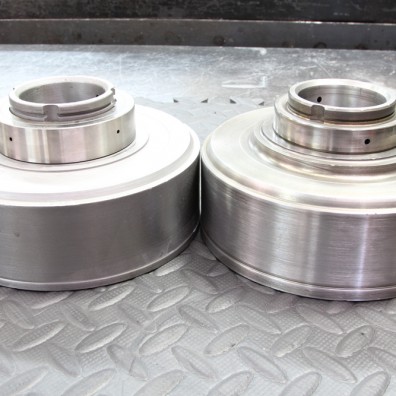 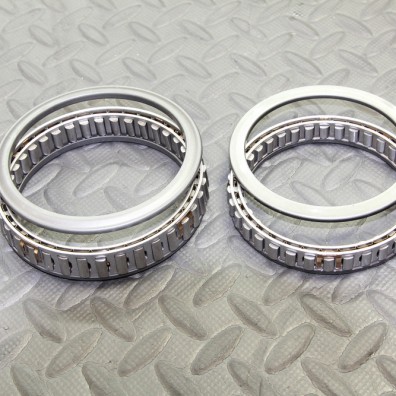 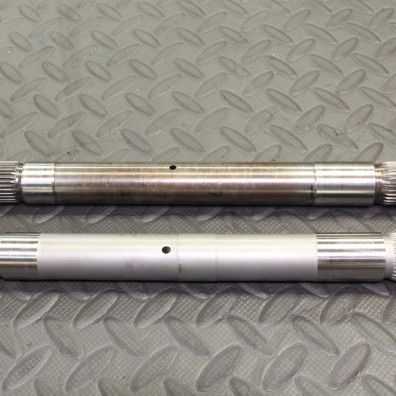 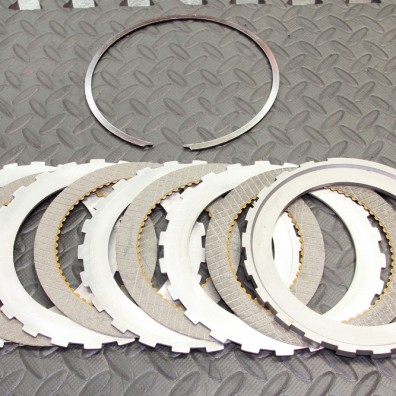 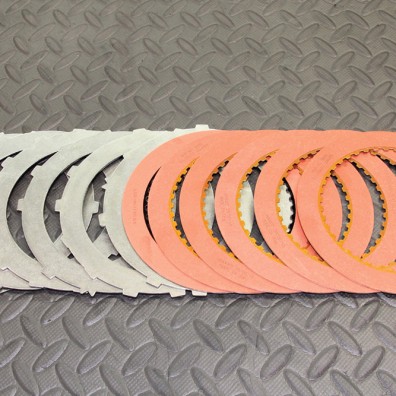 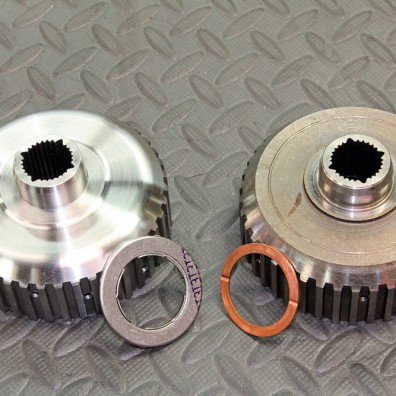 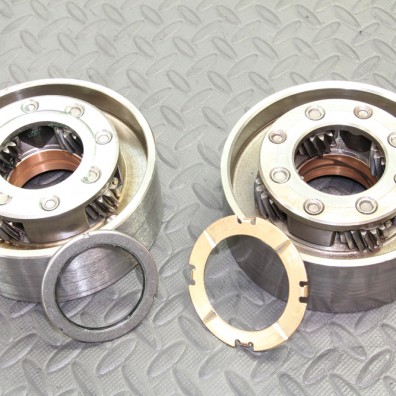 10. Hughes makes improvement in the shift body with new valves and springs. 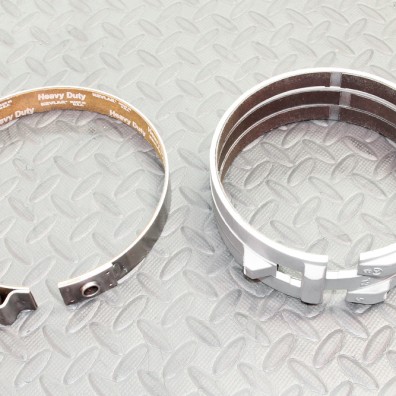 11. Improved bands are part of the Hughes’ package, that’s a Kevlar intermediate band on the left; right is high static rear band. 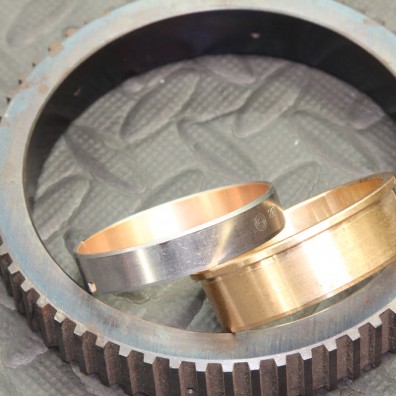 12. Compare the narrow OEM transmission case bushing, to the wider version. The shouldered design of the aftermarket bushing that prevents it from walking out of case. 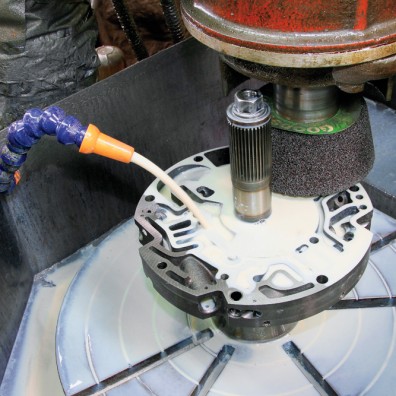 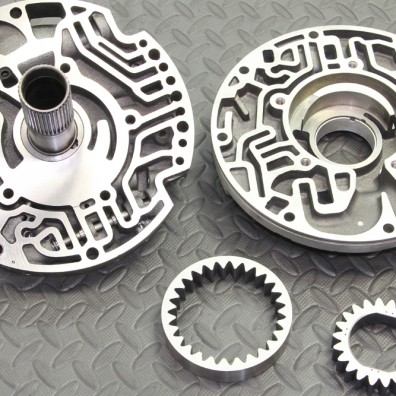 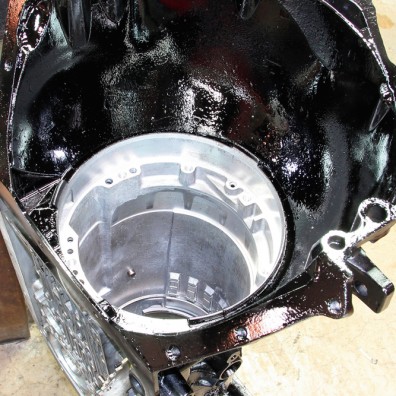 15. The cleaned, refurbished, and painted transmission case is ready to receive its internal components. 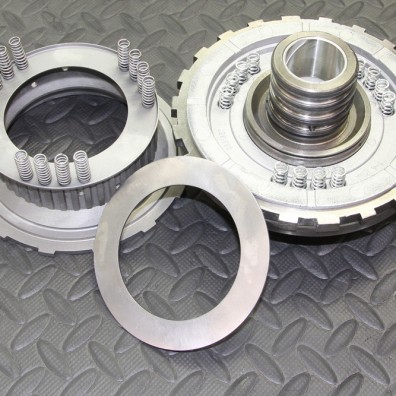 16. These parts are the direct clutch hub (left) and the center support (right). 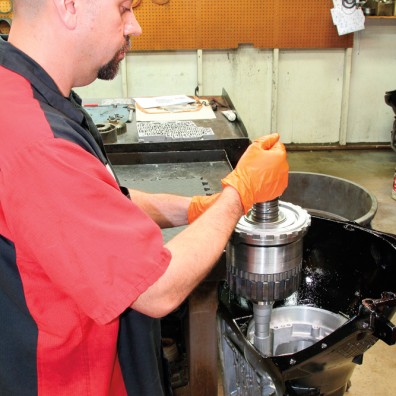 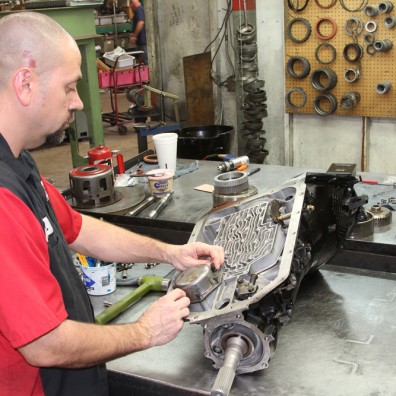 18. The rear servo is bolted in place; it applies rear band to help create reverse gear. 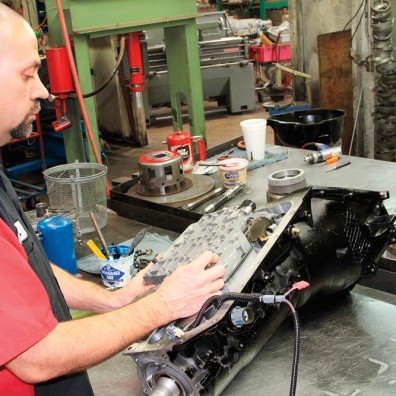 19. Next comes the installation of upper vaivebody, internal wiring harness, and the case connector. 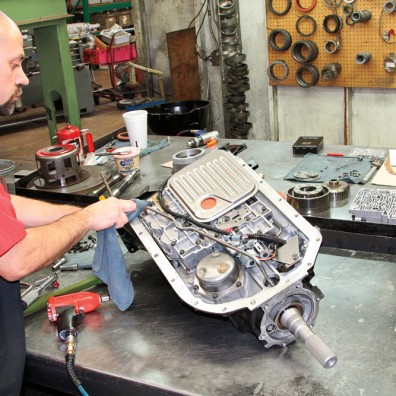 20. The last internal parts to go in place are valvebody and filter assembly. 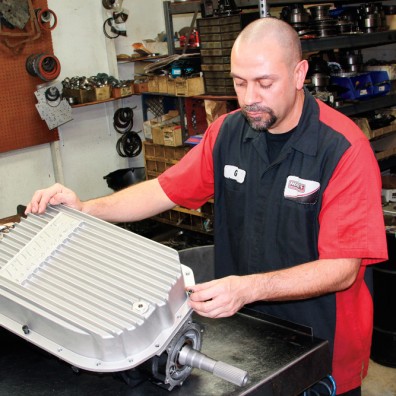 21. The last step before going on the dyno is the installation of deep cast aluminum transmission pan. It’s equipped with a drain plug for easy servicing and holds 4 extra quarts of fluid for additional cooling capacity.
Page load link
Go to Top